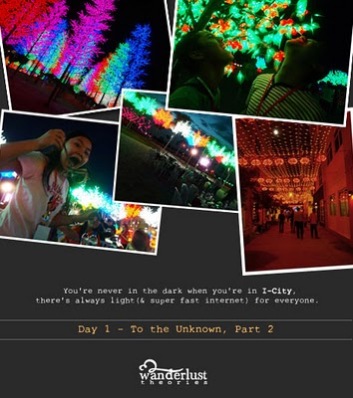 Come to think of it, there were many things I checked in my to do list while going for this MySelangorStory tour. One of them was to visit i-City. I got to know of this place through numerous photo albums uploaded by my friends on facebook who had visited i-City. Didn’t think I’d come to this place this soon though 🙂

Well, the plan was to dine at i-City. But little did we know, they had set up the dining area in the middle of the digital of lights park for us, and wouldn’t you know it, the only other person who had dined in that same spot was the Sultan.

Truly, we were welcomed like kings and queens indeed. Let’s not even talk about feasting like one yet!

As we got off the bus, we were greeted warmly by the staff of i-City, something I still couldn’t get used to. Such warmness should be spread around to every Malaysians everyday. 🙂

After the presentation about the developments of i-City, it made me realise that Selangor really plans to move forward with technology as it hopes to be the IT hub for everyone. What with the exceptionally fast internet speed, I couldn’t think of any better reason not to drop by here. Oh wait, there is one other good reason actually. But we’ll get to that stage later.

So i-City wants to be the leading animation studio in the future eh? It’s high time since the economy has been moving towards advance technology and what better way to bring in more income than this right? I shall wait for the day when Lucasfilm hand picks a Malaysian animation studio to work with them 🙂

Hey, one can dream right? Oh, we have so much to catch up with the rest of the world! 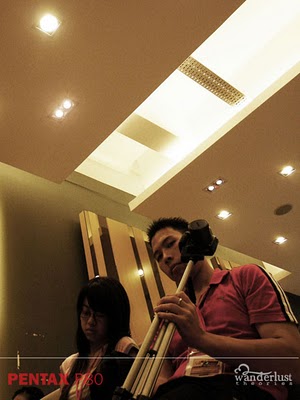 After the short presentation by the CEO of i-City, Mr Eu Hong Chew, we then were adjourned to our dining area which was at the park. I’ll tell you one thing about myself that the world already knows – I’m a sucker for steamboat.

When we went to the our tables, we found out that they were serving us seafood steamboat. Double joy! God, you should have seen the size of ’em crabs. Goodness. It was huge..and juicy too. Yummeh. I could still remember the taste of it 🙂 After all, what is Malaysia without good food right?

Because 70% of the population at my table were girls, we couldn’t finished the food as much as we had hoped to. However, we didn’t put the food to waste by simply adding them inside the soup. We just added according to our consumption instead. That pretty much took roughly about 1.5 hours of eating before we went into food coma 😉

But that didn’t stopped us from moving about around the park. It was too inviting to not explore!

You know, the whole time I was there, there was only one song that was played in my mind and I thought it fit so perfectly well as their anthem. U2 – City of Lights 🙂 I think that will be my official i-City soundtrack. Being here in i-City got me thinking how amazing it can be in the years to come when they have completed this project. As of right now, it’s still in an infant stage but with the right dedication and ambitions, I think it’ll be a leading hub indeed. Hello, free wifi with fast internet speed is enough to lure you in (especially if you’re staying nearby). 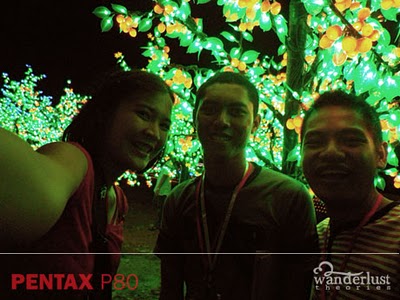 Best part about this place would be the LED lights surrounding the park in all shapes and forms. Hence the Digital Lights park. It does have the whimsical feel to it. Although, I’m not sure what T-Rex was doing at the end of the park tho o_O. In a nutshell, this park caters to all ages – young and old; a place you have to visit at least once in your lifetime.

Just so you know, the park opens from 8pm to 4am everyday. FINALLY, Malaysia has a park to call it’s own without worrying about being caught or have curfews.

Since it is new, the entire place is still what I like to call a prototype. At least for now. There’s a small scale snow room for everyone to wander around. This room will eventually has it’s own section somewhere in the park in a bigger scale – think Mines Wonderland’s Snowland. Yeah something like that. Brrr..

As usual, wherever I go, it’s usually the people that I love observing. They make an interesting subject to ponder on ‘cuz you’ll never know when someone you don’t know can make your day by doing something you didn’t expect. So, it’s really no surprise that a lot of my photos I took consists of other people.

And it’s only in Malaysia that I’ll get refused when I asked for permission to take one’s picture. At least that’s what happened when I approached one of the visitors at the park. It was my first time being rejected for a photo but that didn’t deter me from taking other people’s photos.

Then I saw this group of girls happily posing in front of (assuming) their favourite band.

They were such a sport! I couldn’t help but intrude in their comfort zone. Of course this time, I had improvised my approach (actually I was misunderstood) as they thought I offered to take their photo with their camera (which I did) and then I clarified about my true intention. Luck was on my side since they didn’t mind me taking their photo 🙂 Thank you girls!

If there’s any lesson I learned from this even it would be not to give up and always find alternatives to do something because there’s never just one way of doing it. 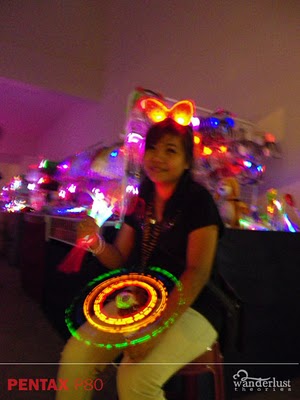 Then, I walked around and saw this particular shop at the corner lit up with so many vibrant colours. Suddenly, I felt like a kid again seeing these toys coming alive with the lights. After browsing through the many incredibly awesome things they had, I walked out satisfied with a magical orb/ led lit translucent bouncing ball for RM10 🙂

And apparently I wasn’t the only kid at heart around here .. as soon as the rest of the bloggers saw me with this orb, I managed to persuade one of them to get it too. The power of indirect marketing! Heh.

After that, we were brought to Uptown Shah Alam to enjoy the night bazaar at Seksyen 24. If it weren’t for MySelangorStory, I don’t think I’ll ever know this place ever existed. There were many people outside waiting for us to drop by. For a moment, it did felt like we were some famous people.

Wait, En. Aizul Hisham explained further about uptown before this night bazaar thing came around, it started off as a funfair. Don’t we just love the ’80s? I used to anticipate funfairs when I was younger. I’ll get excited whenever I see Ferris Wheel standing tall. Then in the 90’s it became a pasar malam. Moving to the new era, it is now a night bazaar with sturdy structures for all stalls. Here you can find all kinds of things. Believe me when I said all kinds of things – there’s a shop selling fighting fish in plastic containers and snakes.

Oh yes. Those ..err..no neck monsters are in Uptown too. *runs away*

Jass Cafe was our last pit stop in the bazaar that night. We had some refreshments to keep us awake, at least enough energy to take a look at what Uptown Shah Alam is all about.

Always expect the food stalls to be up and running till late because if there’s a business that doesn’t die, it’s the food business. Case in point. It looked so good, I was tempted to get some but..I was too full to eat anything that night.

We were entertained by Irwan Shah as well as a local magician in some hidden corner of the area. Also featuring two people from our group (names shall not be mentioned :P). Ah, it was a nice way to end the night actually.

By the time we reached the hotel it was close to 1AM. And everyone was busy mentally jotting down what to write in our blogs.

Since the rule was to blog our journey on the day itself, P1 W1max was our official broadband provider and gave us each our own broadband to use. Unfortunately, it doesn’t run on Mac OS. I was a sort of let down by it since I can’t use it. Hopefully they’ll be mac friendly in the future

And that ladies and gentlemen was how we spent our Thursday.

On a side note, it’s be really really realllllyyyyyy awesome if you could vote for me (daniaryezel) at MySelangorstory/like-qings-and-kueens for the posts you like 🙂