Treat everything we do like it’s a form of art.

I was watching Masterchef Australia Season 4 which Heston Blumenthal was part of the Mega Invention Test. Dude’s most known for his insane creation by merging two unthinkable ingredients together.

Anyway, while watching the episode and when he said something along the lines of being in a creative space and under pressure to create something is what’s most exciting – and that thought brought me back to Chemat‘s Street Photography Masterclass workshop during Obscura 2013 last June.

That was exactly how I would’ve explained the intensity throughout my trip then. I’ve spoken highly of this 10 days program and was so inspired that I’m hoping a project I’m working on would see the light of day and have some sense of belonging as it did with Obscura.

Many asked me what it was like during the 3 days workshop in Georgetown, Penang. I only have this to say,

I don’t know how else I could have word it out so excuse my french.

I hear whispers, words of terror that Chemat is one to be feared. And yours truly has every right to be afraid too, I mean this is one of the legends in Malaysia we’re talking about.

“Well, worst case is, he won’t like what you do and make you do it again” a friend said.

Right. Like that’s any comfort to my anxious mind.

But it turns out, he’s a lion to his students in MMU. Outside of it all, he’s really a humble man who’s willing to impart knowledge on you. So much wasted brain cells on feeling scared, I learned to relax as we go along during his briefing.

There were about 13 of us. Maximum was 10 but I can see why so many were so eager to register for his session. We were made of from different parts of the world – Washington, Dakar, Germany, Bali, Singapore..basically everywhere around the world. I went into this session alone but end up anything but that.

The weirdest part during Chemat’s briefing on Day 1 was that, I was the only one busy live tweeting while the rest make mental notes as he walk us through what makes a street photography, history, etiquettes and more. The things he shared with us were so valuable, I think everyone would get something out of it .. therefore I retreat to the medium I’m more familiar with. I might’ve spammed my followers with bits and pieces of Che Mat’s wise word, hopefully someone find it useful.

Before this, I never thought street photography to have such depth. All this while, I’ve been accustomed to just snapping as I go along – he made us stop, think and find meaning in each frame. He made us throw our bad habits; we had to unlearn to relearn this new approach. Street is always about the moment we capture and it still is, just that the technique and mentality has been turned 270 degrees. 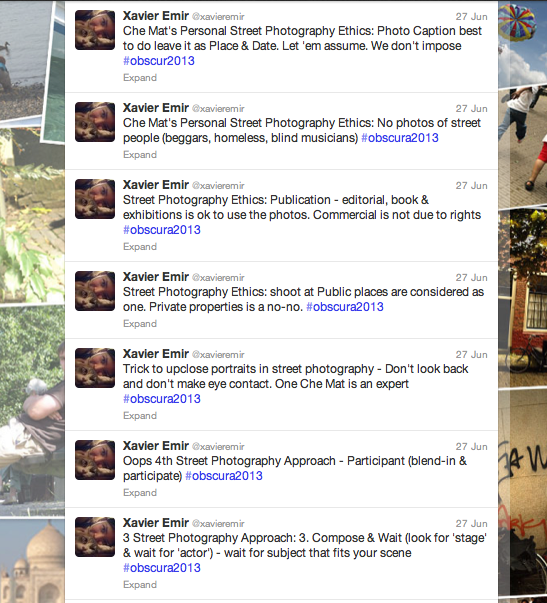 After his briefing, we went out together as a group with Chemat. First part of the day was the theory section. The second part is the practice. I was still intimidated and unsure but slowly I found reassurance with myself. Partly because I was still figuring out my new camera. Talk about throwing myself into the sharks.

We were brought to spots Chemat tend to do his shoots, taught us how to be approachable, respect strangers and just simply be. Stick around next to the legend and you’ll pick up details like composing before snapping, waiting and anticipating for a moment to happen and think about the subject before shooting. It’s these nuances that made him great, these nuances that he wants more people to apply into their habit. 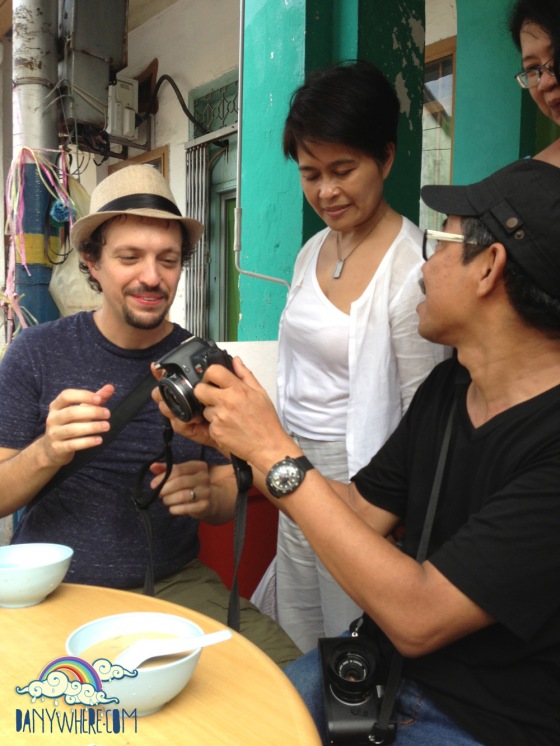 See, there are a few points Chemat had mentioned which I find most profound. One of which was that – even if you went out and do your usual street photography, it’s ok to come home with nothing (good). So long as you keep doing it, eventually you’ll get something. In today’s world, people want quick fix and instant results. Which isn’t how life works as a whole but people are still adamant to make it happen that way. Having him stressing out the importance of letting go of expectations, you find more patience in everything you do. It’s that secret power you harness what makes your photos tell a deeper story, a better one than before and hopefully one that resonates with other people who view it too.

After all, if a photo is unable to bring out the emotions it speaks, it’s only just a photo. A two dimensional one.

Then there’s the wisest statement I’ve heard in a long time – he also stressed out the importance of one particular street photography rule. Never ever take photos of beggars ( and visually impaired musicians) on the street. That is not street photography by any means. If anything, you’re exploiting their unfortunate lives for your own benefit. Unless you’re doing a story about them, understanding who they are and intend to make your story help them in a positive way, then don’t ever. Taking advantage of others who couldn’t do anything about their situation without purpose is just insensitive.

That’s his rule of thumb. Something we all can apply into our daily life. Think before we share, speak or do something. If we’re doing it just because we want to be part of something (without deeper purpose), there is no point in doing it. Do something with purpose. Do something good.

And it’s always good to have principles to hold on to. At the very least, when you go off track, you can look back and ground yourself to what/who/where you truly are. You’ll pick up these tricks along the way as you discover yourself. Be constantly curious and adaptable.

What did I learn at the end of the trip? What I thought my strengths were was otherwise not the case and I found out that I’ve got a knack for graphic things. I’m more drawn to those and having him pointed it out to me when we were reviewing our pieces really shed so much light into what street photography is all about. So that 2/3 of the day images I took were not hitting the mark now that I had a new direction. So off I went waking up 6am and walked to the other side of Penang, waited and anticipated for moments.

I sat for more than an hour outside Komtar. No one was around at that time, one could just cross the road easily. I went to this place the day before, but didn’t get the shot I wanted. Given that I only had until 9am to get my shit together, I look for something..anything really and found a possibility.

That was exactly the case with this particular photo I took as part of the concept. The 5th photo that made into the presentation list. Wasn’t part of the plan but it became THE plan. I was trying to capture the uncle at the shop lot but then, a pack of dogs decided to photo-bombed.

Yep, this was the result of that. The one I didn’t expect to snap but I did. In that moment, I finally understood what Chemat has been talking about. Waiting for that moment, composing the subject and just be patient. Everything he said throughout his talk wrapped into one image.

So y’know, it helps to go with the flow when it comes to things that’s beyond your control. You’re more relaxed, open-minded and accepting of things. I like this.

When it was time for our final group review before slideshow that evening, I was as nervous as a noob can be. What more being among the most talented bunch of cool people in this class..geez, I’m like somewhere at the bottom. However, that’s not the point of joining this session..I brought back so much more, in fact it helped boost my confidence just a little bit more. We all know what a mess I can be when it comes to the public, having people actually sit and anticipating for our work was every bit a nerve wrecking experience for me. One that was projected to an empty wall at the temple opposite China House with people lying down on the grass and more on the bench, oi, some experience that was! To be honest, so many times I felt like getting out of the place, not wanting for people to see what I shot the past one day. Shout out to Anis for the moral support 🙂

Having a good collection of photos, street photography for that matter is no easy task. It’s something that’s almost out of your control – whatever the result of your photos may be. But patience.. that’s all it takes to build up something good.

As for Chemat, you students are lucky to have him as your lecturer. As strict as he is..it will carry with you to the end. Don’t bother hoping for someone who’s more delicate with you, you bunch of lucky folks.

4 thoughts on “Obscura 2013: Finding Familiarity in Art with Chemat”